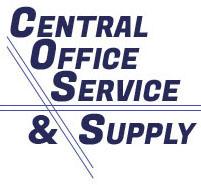 Central Office Service and Supply seeks to provide customers in North Central Kansas with a wide variety of quality office products, furniture and machines at competitive prices supported by our friendly and knowledgeable staff. Our goal is to deliver “Value” by recommending products with a low cost of ownership and by maintaining a high level of customer service through prompt service response and delivery.

Central Office Service & Supply officially opened it’s doors as “Mail-Me-Monday of North Central Kansas” on March 1, 1947 with offices upstairs in the Guest Building (Now Ginger’s) in Clay Center, Kansas. Wilson and Wilma McMahan had just moved to Clay Center from Topeka, Kansas and employed Henry Copeland in this franchised accounting business under the Accounting Corporation of America. Wilson and Henry called on a wide variety of businesses in a 60-mile radius of Clay Center, providing them with basic accounting services and monthly financial statements - as long as they mailed their receipts and other records to our office every Monday!

Recognizing that these businesses needed a source for office supplies and other office equipment, Wilson and Henry formed a partnership on March 2, 1948, and named it Central Office Service & Supply. They continued to do accounting and to use the franchise name of Mail-Me-Monday for a few more years, but it became apparent that they could handle the work quite well without the additional burden of the franchise, so they stepped out entirely on their own as Central Office Service and Supply in 1951.

The business moved several times in these early years with one of the first multi-year locations being 401 Lincoln Avenue. In 1956 the move was made to 423 Lincoln Avenue, which permitted the display of a wide selection of office supplies, furniture and machines. Wilma McMahan and Ruby Copeland started a section of the store devoted to gifts. Products included Ambassador Cards, candles, Bigelow Constant Comment Tea, Droste’s Chocolate and other items that were not commonly available. During these years an office machine technician was added to the staff to repair both manual and electric typewriters, adding machines, mimeographs, spirit duplicators and paper folders.

In 1964 the building immediately to the West became available, so Central Office Service & Supply expanded, retaining the front portion of the former building as well as taking over the entire space at 421 Lincoln Avenue, the East one-half of our current facility. Wall’s Hardware had also begun to expand, so they used about two-thirds of the previous building. Sharil and Robert R. Carlson moved from Topeka and Bob began working as an accountant in 1968 and joined the firm as a partner in 1971. During this time the accounting work grew to the point that up to five people worked full time doing the job with pencil, adding machine and typewriter – tedious and exacting work.

In 1974, Wall’s needed the entire 423 Lincoln building, so the former Northwestern Federal Savings and Loan building at the corner of 5th and Court Street was purchased, and the accounting portion of the business was relocated. Also in 1974, Steve and Sheryl McMahan came “home” from Chapman and Steve began working for the business and became a partner in 1977. Product lines at this time included Smith-Corona and Olympia typewriters, Rex-Rotary Mimeographs, Heyer Spirit Duplicators, Yorktown liquid electrostatic and 3M Thermofax copiers.

Many changes began impacting the Office Supply and Office Machine Industry in the 1970’s. The first electronic calculating machines entered the market, and copying machines finally became available for less than $1,000! Xerox and IBM patents began to expire, which allowed a variety of plain paper copiers and “ball” typewriters to be manufactured by other vendors. Central Office Service and Supply added Saxon plain paper copiers and Facit ball typewriters during these years.

More expansion occurred in 1984 with the purchase of the 419 Lincoln Avenue building, formerly Buchmann Jewelers. Central Office was completely remodeled with a beautiful gift display, large office supply and machine displays, offices for key staff and an expanded service department. Our current store is in the same location, but has been reconfigured as product mix changes. A warehouse was purchased behind the store in the 1990’s which allows Central Office to take advantage of a variety of purchasing opportunities.

Many staff changes occurred during the 1980s with the founder, Wilson McMahan retiring in 1981 and Henry Copeland in 1985. Randall R. Carlson joined the firm in 1982, and Steve Wickersham became a sales representative in 1987.

The 1980’s were years of tremendous growth. Our wholesale partner, the S.P. Richards Company, provided an increasing variety of office supplies and furniture at competive prices, enabling us to compete more aggressively. We became an authorized dealer for Panasonic Plain Paper copiers in 1981, giving us access to world-class quality and innovation. Panasonic expanded in the office market with electronic typewriters and the first affordable office quality word processors. Due to success in helping many schools transition from teaching only typing to extensive word processing, Central Office Service and Supply was named the State Champion Typewriter Dealer of Kansas by Panasonic in 1988.

The 1990’s brought many more changes, with the primary new product being personal computers. Many area businesses purchased their first computers from Central Office, and this aspect of the business has continued to grow. We are pleased to continue working with Futureware, Inc., our primary computer supplier in Omaha, Nebraska who has given us excellent service and top quality products for over 20 years. We have also recommended, sold and serviced Hewlett-Packard business computers, printers and MFP’s for many years. The Accounting division was sold to Randy Carlson and Robin Thurlow in 1993, in order to permit Central Office Service & Supply to focus entirely on Office Machines, Furniture, Office Supplies and Gifts. The business structure was changed from a Partnership to a Corporation about this time. Robert R. Carlson retired in 2002, and Steve Wickersham became co-owner with Steve McMahan at that time.

Central Office Service & Supply has always sought to be on the leading edge of technology. We handled the Western Union Telegraph Service in Clay Center until about 1970, and introduced facsimile equipment in the 1980’s. In 1996 we partnered to bring the first local dial-up Internet access to Clay Center, and in 1999 we brought the first high speed wireless Internet access to customers in Clay Center and nearby rural areas. Today we take Internet access for granted, since many good options are available, but no major players were interested in Clay Center in the 1990’s and we filled the need! While products and facilities are important to a business, it is the wonderful employees who have been part of our team over the years that have enabled us to grow and continue to serve in an increasingly competitive market. We have been blessed to have many employees stay with us for 10, 20, 30 or more years. Many of our current employees have gone through the tremendous transitions in our industry and have the kind of knowledge that only years of experience can develop.

Our goal remains to provide quality products at affordable prices with unmatched customer service. By helping customers choose just the right piece of equipment or furniture for their needs and budget, delivering and installing those products, and continuing with training and service as needed, we assure years of satisfaction. Some of our greatest joys are working with long term customers and adding new customers who are discovering that we still do business with old fashioned trust and integrity.

We have now ventured into the world of E-Commerce, which will bring additional benefits for our customers. Our website offers new lower prices to all customers. Instead of monthly special prices on a few items, we are offering manufacturer supported deeply discounted specials on a weekly basis which are available by e-mail and on our website. Please take time to browse and provide us with any suggestions you have that will enable us to serve your needs even better in the years to come!